The Gang Enforcement Company is available to members of the print, digital and television media for expert opinion, investigative insight, documentaries, as well as television and web-series consulting.

If you would like to inquire about our assistance, please submit your request below.

HAVE A MEDIA REQUEST?

GANG ENFORCEMENT IN THE MEDIA

The growing epidemic of gangs and guns in the United States
MultiBriefs Exclusive | January 30, 2014

Rusty Keeble, CEO at The Gang Professionals Company LLC and director of the National Gang Academy, highlighted a critical issue with these numbers while talking to police chiefs at the International Association of Chiefs of Police annual conference in Philadelphia. Though these statistics are arresting, the reality could be much worse, as the response rate to threat assessments used in this report was only at 40 percent.
​
This also means, however, the 40 percent jump of reported gang membership from 2009 is probably closer to 25 percent, Keeble said, as response from surveyed jurisdictions improved between 2009 and 2011.

"At some point, gang violence comes up when you talk about gun violence," Keeble said. "Gangs and guns go hand-in-hand. That's the reality."
​
"We have to work smarter, not harder," Keeble said. "Gang members have guns and like to fire them. You need to be evaluating your gang presence. And if you want to get serious about addressing these issues, you have to ask the tough questions. Because it's not about gun control — it's about gun crime reduction."
Contingent Security Services, Ltd. & The Gang Professionals Company, LLC. enter MOU
Contingent Security Services Press Release | December 31, 2013

SCHAUMBURG, Ill. - Dec. 31, 2013 - SCHAUMBURG, IL–Contingent Security Services, Ltd. is pleased to announce that Joel Vargas, Director of Operations has executed a MOU and Strategic Partnership Agreement with The Gang Professionals Company, LLC. (GANGPRO). The agreement is for both organizations to be able to exchange opportunities as well as fulfill some of the mutual existing and future needs.
Recognition of the Rusty Keeble Foundation and the GANGFREE America Campaign
United States Congress | PDF Version | Congressional Record | October 30, 2013 ​
These staggering statistics are one representation of the effect of gangs on our communities and country, but the more potent manifestation of these numbers is the lost potential of the young people who get involved. Across our country, too many young men and women are seeing their future possibilities narrow into one act of violence, one drug deal, one prison term, after another.

Initiatives like the GANGFREE America Campaign are taking the steps needed to correct our nation's gang-related problems and working to ensure brighter futures for our youth. The GANGFREE America Campaign's community-focused approach employs schools as well as law enforcement to unify and empower citizens against the formation and spread of gangs in towns and cities across Illinois as well as the entire country. It is my hope that with the help of organizations like the Rusty Keeble Foundation, we can eradicate the gang epidemic in the United States, and I am honored to rise today to recognize their courageous efforts.
Street gangs and social media: Explosive combination, law enforcement says
Daytona Beach News Journal | October 12, 2013

With the onset of social media years ago, street gangs discovered an effective way to publicize their exploits to whomever was willing to double-click and tune in, police and criminal justice experts say. While street gangs have been putting out their messages and agendas for decades, sites such as Facebook and Twitter have simply facilitated that and carried it a step further, according to Rusty Keeble, founder of the National Gang Academy and Gang Professionals Company, and a former member of Orange County Corrections' Anti-Gang Enforcement Unit.
​
“What social media has done is generate the idea that everyone can be a rock star and a media star,” Keeble said. “Fifteen years ago these gangs would never be able to put out a video. Now every cell phone has a camera, every cell phone takes video and within minutes, you put out video that is seen by thousands and thousands of people.”
Why Gangs Exist: Stopping gang Violence
Hands off our Children Radio Show | April 03, 2013 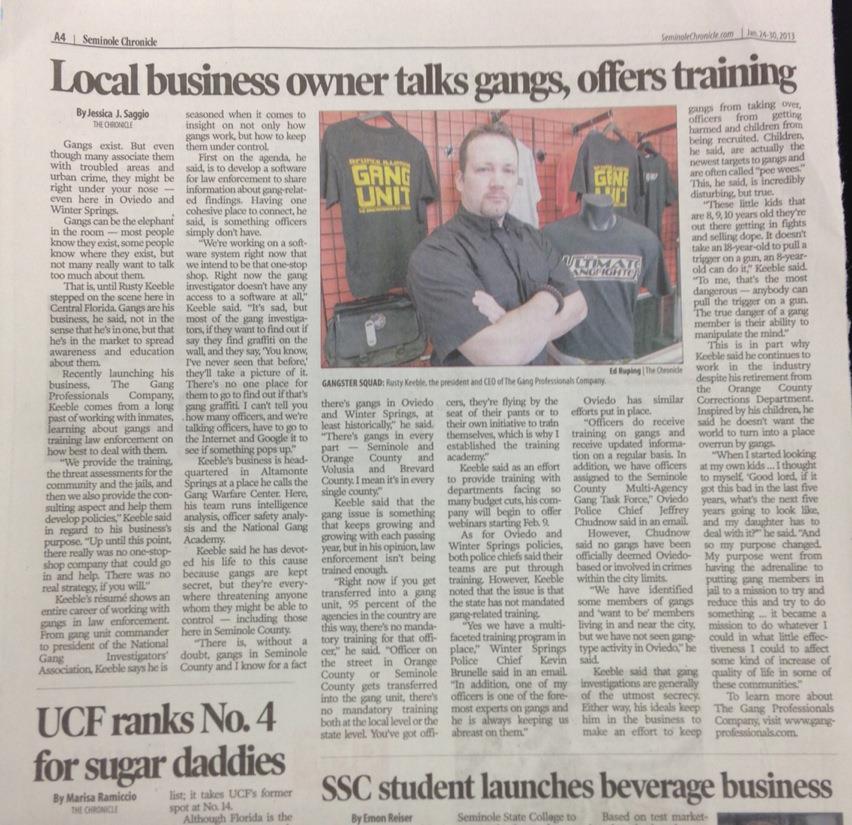 Our friend Rusty Keeble of Gang Professionals International and GANGFREE explained it best. If the gang problem is a bathtub filling up to the brim we must not only make sure the drain is open and operational, but that we stop the new water from entering the tub. The tub has been filling up for decades, so we cannot expect to have it fully drained in our lifetime. We are but a temporary custodian of the issue and, hopefully, we can help reduce the issue for the next entity that wants to see the tub empty. That analogy can be applied to any crime issue.  That’s where the legacy effect comes in.
GANGFREE Project
Tim's El Salvador Blog | June 21, 2009
GANGFREE Florida Project
Latino Police Radio | August 08, 2009
GANGFREE Project
Flash45 Blog | May 20, 2009
Orlando Chief Has Own Plan to Fight Gangs
Orlando Sentinel | December 04, 2007

Experts on gang activity said every major city and county needs a gang suppression unit, like the one in Orange County. "I think it's absolutely imperative," Rusty Keeble of the National Alliance Of Gang Investigators said.

"If you wait that long to start a gang suppression or a gang enforcement unit, you've waited too long," Keeble said.
Surge in gangs: Is more violence ahead?
Orlando Sentinel | October 07, 2007

​"If we name one gang and not another, then the one that wasn't mentioned will go and commit crimes to get the media's attention. It gives them credibility," said Rusty Keeble, Florida Gang Investigators Association (FGIA) president. "It's a fine line, but the secrecy is to protect the community."
Thug Life in a Rural Town (MS-13 is coming to your town.)
Palm Beach Post | April 09, 2007

"There is denial about the gang issue at every level of government," Keeble says. "I had an official in Orlando tell me once, 'There will never be gangs in Orlando. This is the land of Mickey Mouse.' Well, at last count, there were about 2,500 gang members in Orange County."

Gangs inevitably turn to violence, Keeble says. Just as a serious juvenile delinquent goes from stealing a bike to stealing a car to more serious crimes, so do gangs, he says.

"If there is another gang in their area, they just push each other to be bigger and badder," he says.

Keeble insists it doesn't matter whether gang kids live in Miami, Palm Beach County or under the pecan trees and Spanish moss of North Florida.
​
"Someday, someone is going to get shot," he says. "You can't wait until the bullets are flying to admit you have a problem."
Top county officials skip gang forum
Sun Sentinel | March 28, 2007

Exactly how much crime can be attributed directly to gangs is unclear because many law enforcement agencies, until recently, didn't keep track of such crimes, said Rusty Keeble, president of Florida Gang Investigators Association.
​
"If you have more accurate statistics, then you've got additional firepower to go to legislators" and ask for more money to fight gangs, Keeble said.
Pinellas County not immune to neighborhood street gangs
Tampa Bay News Weekly | March 02, 2006

Organizations, such as the Florida State Gang Investigators Association headed by Rusty Keeble of the Orange County Corrections Department in Orlando, keeps officers throughout Florida aware of street gang activities.

The association even holds an annual “intelligence-sharing event” that is attended by law officers from all parts of the state.
How to...Crack Down on Gangs
POLICE Magazine | January 01, 2004

According to Rusty Keeble, Commander of the office of security intelligence for the Orange County (Fla.) Corrections Department, Florida has been rated as the state with the most significant increase in gangs in the past 20 years. This is a title the state is working hard to get rid of, with help from its monitoring program.

In addition to its own gang unit, the Orange County Sheriff’s Office has an exclusive relationship with a gang unit from the Corrections Department that monitors the known gang areas in the county.

“Wherever gang members meet, they always see one of our gang investigators there,” says Keeble.

The Orange County Corrections Department is, according to Keeble, one of the first in Florida to initiate a gang unit that works with the local sheriff’s department. And so far, it’s been successful.
​
“I have 15 intelligence officers in the jail that are out there making human contact with gang members on a daily basis,” says Keeble. “They develop intelligence, know what gangs are doing, what the new trends are, where they hang out.”