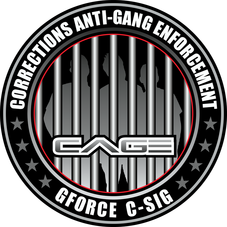 The presence of criminal street gangs, prison gangs, outlaw motorcycle gangs, extremism groups and security threat inmates has made the corrections environment one of the most dangerous in the world to live in for non-affiliated inmates and work in for correctional professionals at every level.  In many cases, this presence is a result of increased gang identification, enforcement and prosecution efforts by law enforcement where by creating a rapidly increasing gang populations among some of the even smallest of correctional facilities.

This increase in gang membership has a direct impact on inmate-to-inmate altercations, inmate-to-officer assaults, increase in medical costs, maintenance costs, staffing costs, and even staff manipulations not to mention to threat to public safety and the quality of life issues.
Corrections is an incredible source of criminal intelligence for the entire criminal justice system and the community. The corrections population is a direct reflection of the community and their elements.
Explore our CAGE Training Programs
CAGE CERTIFICATION
Law enforcement professionals for decades now have highlighted the success of gang enforcement initiatives by stating as the final measure of success and completion of an investigation or operation, “we put them away,” “we sent them to prison.”
​
​Convicted gang members do not disappear into some black hole, or reside in cells with no outside stimuli or contact with the outside world, as the entertainment and movie industry have portrayed and the public has been led to believe.

​To the contrary, they have access to methods of communication that are provided, created or altered to suit their criminal intentions. The notion that gang members stop being gang members while being incarcerated is simply inaccurate. In most cases, their level of gang involvement increases.

Every major street gang that is active in the United States received direction from persons incarcerated in our nation’s correctional facilities.

This includes violent street gangs with national affiliations such as the Latin Kings, Black Gangster Disciples, Vice Lords, and many others.

Many of these leaders have been in prison for decades in a segregation status and still able to mastermind and direct the operations of gang members both in our prisons and on the streets.​

Today, millions of convicted felons, violent gang members, domestic terrorists and inmates dedicated to an ideology based on hate call our nation’s correctional facilities – home. If we want to put our finger on the pulse of today’s gang crime and activity, there is no better place to do so than from within the confines of our detention facilities, jails and prisons.
For correctional agencies; the failure to recognize the threat potential to both the agency and the public and not collecting gang intelligence, implementing strong zero tolerance policies and procedures allowing for aggressive identification, management and monitoring of gang membership and activity can result in increased violence, in-custody crimes, staff assaults, threats to the public and death.
​
JOIN GFORCE BLACK | ALL ACCESS