Dead Man Inc. or DMI is a predominantly white prison gang with branches in many correctional facilities throughout the U.S.
Due to its increasing power within the Maryland Correctional System, DMI leaders were transferred to facilities in other states including Louisiana, Texas, and Florida. This has facilitated the spread of the gang. It has also been reported that DMI has been moving its operations into the streets of Baltimore. There are currently six main units in Baltimore City, one in Carroll County, and one in Howard County.

There was much upheaval and internal strife within the organization itself. The once tight-knit structure of the group has broken down with the explosion in numbers, as members compete with one another leading to violence between members. Fueling these internal divisions is the fact that leaders disagreed about the direction of the gang. Perry Roark wanted to return the gang to its former position alongside the BGF, while other leaders want to adopt a white supremacist ideology.

A federal grand jury in Baltimore charged 22 defendants with conspiracy to participate in a violent racketeering enterprise. All but one defendant are also charged with conspiring to distribute drugs. The indictment was returned on October 6, 2011 and unsealed upon the arrests of seven defendants and the execution of seven search warrants. Eleven defendants were previously in custody and four defendants are still at large. 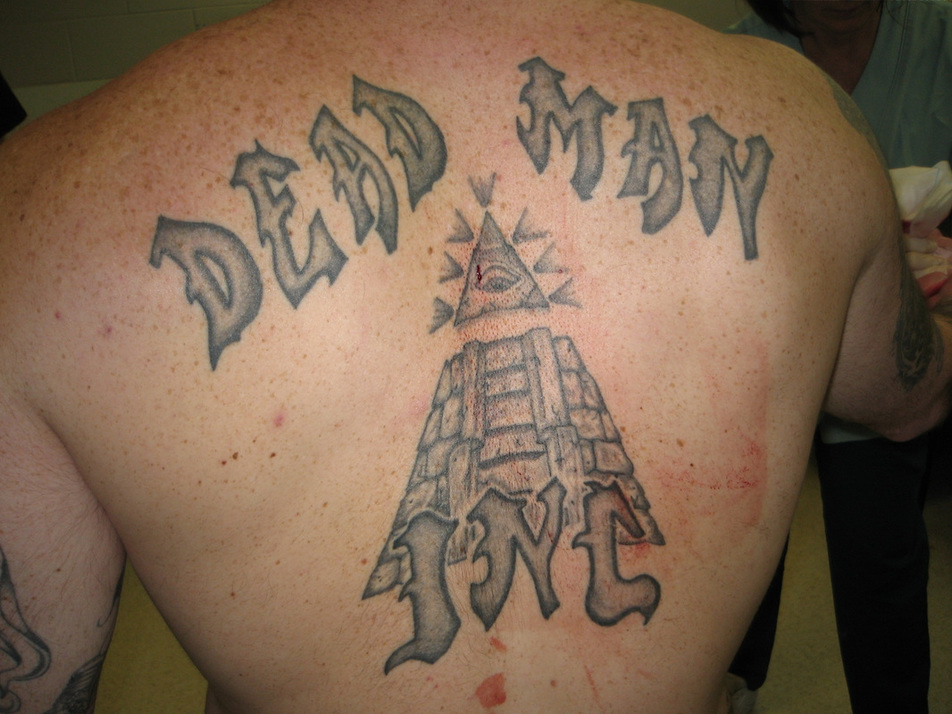 13th - Dead Man Inc (DMI): Last day of amnesty; members were able to "opt out" no questions asked (2009)
Historical News Reports
Leader of Dead Man Inc. gang renounces group at sentencing
January 07, 2013 | By Justin Fenton, The Baltimore Sun
As a federal judge handed down a sentence that will virtually ensure Perry Roark spends the rest of his life behind bars, the founder of Maryland's largest home-grown prison gang renounced his association with the group.

Roark, a hulking man known as "Rock," was sentenced to life in a prison Monday for his role in creating Dead Man Inc., an organization of white inmates that prosecutors said has since spread to other states and led to street violence throughout the Baltimore region.

The 43-year-old pleaded guilty to a racketeering conspiracy count in June, agreeing to a life sentence in the process, but said he'd head to his next destination with the gang in his rearview mirror.

"I freely, openly walked away from DMI," Roark told U.S. District Judge Richard D. Bennett in a Baltimore courtroom. "I don't care or wish to do any more crime. When I go in [to the next prison], I'm independent. I'm not claiming any gangs."

Roark served more than 20 years in state prison for armed robbery and was just days away from being released in 2011 when prosecutors charged him in a killing from the 1990s in Anne Arundel County. Later that year, authorities brought a sweeping federal racketeering indictment that charged him and 22 others with crimes including murder, drug trafficking and extortion.

Those investigations came about in part because authorities feared his release would spur growth of the organization on the streets.

On Monday, Bennett scanned Roark's criminal history and said it was "not really worse than others I see," and noted Roark had an education and had been courteous during his court appearances. He said Roark's crimes pointed to a "fundamental dysfunction" in society.
Roark replied that he was "a clear product of my environment."

Assistant U.S. Attorney Christopher Romano asked that Roark be housed in a high-security federal prison in Colorado that he said is home to the Unabomber, Ted Kaczynski; Robert Hanssen, an FBI agent who spied for Soviet intelligence services; and members of the Latin Kings gang.

Roark, who is white, developed Dead Man Inc. by merging three other gangs within the Maryland prison system in the late 1990s, after he was rejected by the African-American Black Guerrilla Family gang, investigators have said DMI began as a sort of white contractor for the Black Guerrilla Family, carrying out killings and assaults in exchange for drugs, and grew into its own criminal brotherhood, looking out for its members' safety and addictions, prosecutors said.

A co-defendant who helped form the gang, James Sweeney, has also pleaded guilty to charges of racketeering and conspiracy to commit murder in Beaumont, Texas, where he has been incarcerated and was also facing a possible death sentence in connection with a separate prison murder.

In letters written to The Baltimore Sun, Sweeney has claimed continuing oversight of the gang and denied statements made by authorities about the group. He sent a letter in mid-December — asking a reporter to hold onto it until Roark was sentenced — in which he denounces Roark as a "snitch" who is "no longer recognized as a leader of member of DMI."

Sweeney said investigators have wrongly described the gang. "As a whole, DMI [has never] had any alliance with the BGF or any other new-age gang or organization, and we never will," Sweeney wrote. "DMI was founded to counter the gang and clique violence against whites. … The truth behind the DMI and BGF deception will be told in due time. There is always two sides to a story."

As part of his plea agreement, Roark admitted arranging multiple murders — only one of which was carried out — and assaults, and to trafficking in illegal drugs.

Roark's attorneys said he never cooperated with the government, and made clear that he was pleading guilty to the counts against him and not implicating others.

"Not to go into plea negotiations, but this was a major point we went back and forth on," one of his defense attorneys, William Arnold Mitchell Jr., told Bennett.
​
Before the federal indictment, Roark was charged by prosecutors in Anne Arundel County with committing a murder in a state prison in the 1990s. An Anne Arundel prosecutor attended Monday's sentencing and said afterward that the case was dropped after the federal charge and will not be pursued.
Dead Man Inc. gang member gets 40 years in killing
January 21, 2015 | By Justin Fenton, The Baltimore Sun
"This kid is a vicious killer and he knows the system."

That's what Baltimore Circuit Court Judge Wanda Heard had scribbled as she listened to the case against Dane Shives Jr., a member of the Dead Man Inc. gang charged with a double shooting in 2010 that left one man dead.

This week, Shives, 25, appeared before Heard for sentencing after being found guilty in the shooting, and the judge expressed skepticism about his remorse. She told him about the notation she had written down earlier in the case.

"You're either an ace manipulator and doing what you need to do to get on my side, or a genuinely higher power has touched you," she said. "I don't know which is true."

The sentence: Life, with all but 40 years suspended.

Heard said there was no question that the sentence was intended as a punishment. "I do not believe we have rehabilitation behind bars. I wish we did -- but we do not," she told.

The shooting occurred in August 2010 in Brooklyn near Garrett Park. Andre Graham, 27, was killed after Shives fired seven bullets into a vehicle. A second man was wounded and survived. Shives was quickly arrested that weekend. No motive was disclosed at the sentencing.
A year later, Shives was one of 22 alleged Dead Man Inc. members and associates indicted in U.S. District Court on racketeering conspiracy and related charges. In 2013, Shives was sentenced to 15 years in federal prison for that case.

Shives' attorney, James Scott, said his client had grown up around violence and drug abuse, and was committed to the Department of Juvenile Services at age 12. At age 17, he was brought into the Dead Man Inc. prison gang, which offered him a semblance of family, Scott said.

Scott said Shives had accepted responsibility for his actions and was participating in various programs behind bars. "This is an individual who has expressed as much control as he can over the variables he controls," Scott told Heard.

"You are talking about someone who has taken a life," Heard responded.

Shives read a letter to the victim's family and his own family, expressing remorse and saying that he had found God.

"Deep, deep down, I'm a good person with a good heart," Shives said, as a relative of Graham sobbed. "We are all children of God."
​
The case was prosecuted by Assistant State's Attorney Tonya LaPolla.
Disclaimer: The content of these gang profiles are compiled from years of investigations, training, gang member and subject matter expert interviews, confiscated gang paraphernalia, historical research, etc. Information within these profiles may vary from region-to-region and should not be used to 100% document gang membership, activity and/or gang crimes. However, it can be used as a guideline during investigations, strategy development, police development and officer safety awareness briefings. ~ In Omnia Paratus, GFORCE Command